EAS change systems, leading provider of cost effective factory automation solutions, is proud to announce a new executive management team. The arrival of the next generation was announced in 2010 already, and now the time has come. After a long period of collaboration, the new generation is ready to take over control of the business. A new board of shareholders embarking on an era of rejuvenation for EAS.

Anika Marggrander now has a two-fold role as Executive Vice President alongside her sales responsibilities for the German speaking part of Europe and the CIS countries. Thierry Pastor promotes from General Manager China to Vice President Asia & Oceania, whilst overseeing the factory and the business development in Asia. Vincent Nijzink is the new CEO of the global organization.

Starting as technical manager in France, Thierry was asked to start-up the factory in China, focusing on magnetic clamping solutions. Now he is COO of the Chinese subsidiary and responsible for business development in Asia.

Anika Marggrander, daughter of outgoing Vice President Hero Marggrander, joined EAS in 2010. Her distinct view at customer’s challenges allows her to think outside the box and find a practical and user-friendly solution.
Vincent Nijzink, son of receding director Harm Nijzink, started in 2007 by as General Manager in China. He successfully established the Asian sales network. Vincent also started and structured the Chinese factory in Wujiang, Jiangsu Province, China. He returned to the Dutch headquarters in 2010 to take over the operational management as President of EAS Holding B.V. Now Vincent is succeeding his father as CEO of the global organization.

In North and Central America and the Caribbean the leadership remains in the hands of US General Manager, former Vice-President, Cliff Drake.

In the fall of 2015 the EAS ‘founding fathers’ decided to hand over their corporate responsibilities after years of working together with the new generation. They will still offer their experience and expertise to the company and its customers as the EAS’ board of advisors and are consulted for special projects.

The growth of EAS change systems can be called exceptional. In 2001, the company was represented in the Netherlands and the United States. France, Italy and China added to the organization’s growth in the years up to 2015. The ambition for 2020 is to expand further with Brazil, Russia and Turkey, India or Mexico. Sales moved with a similar curve, in 2001 sales amounted to € 3.8 million. In 2015 this was increased to € 10.7 million and for 2020 the target is put at € 17.5 million. 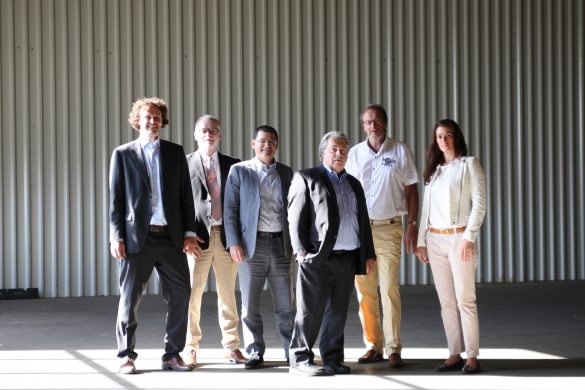