Italian plastic processing industry getting back on its feet

While the amount of visitors this year did not exceed the last Plast edition in 2012, the Italian division of EASchangesystems is optimistic. Most visitors were to be found in the Molding halls, resulting in vivid conversations and interesting opportunities.

There were just above 50 thousand visitors on this year’s Plast, of which one third was international. The content of the exhibition had enough to offer to the people that did make the effort of visiting the biggest Italian plastics fair. “We were hoping for a bigger turn up of foreign visitors, but given the economic climate in some countries, it was to be expected that there weren’t going to be that many Eastern-European visitors. Nevertheless, we’ve had many enthusiastic reactions of plastic professionals that stopped by our booth” states Roberto Rota, who has been responsible for Customer Service at EAS MED S.r.l. for many years now.

Of all pavilions, we’ve heard that the halls that were focused on molding had the liveliest audience. Compared to the other themes, the most Russian visitors were to be found here.
New to the EAS stand team is Egidio Stellardi – “In my role as Sales Manager I must say that the quality of the meetings and conversations we had during the Plast was of excellent. We’ve had some very interesting discussions and the forecast for follow-up looks good. As a result from the exhibition, we returned home with some excellent business opportunities.
We expect to be able to support some organizations with our high quality SMED solutions on short term. “

The sector has suffered a decline during the crisis – said Marcello Brambilla, commercial director of the Italian branch of EAS – and in recent times there has been a shift toward products that are more dedicated and personalized. This trend is given by the need to optimize even more the processes of production and molding. Both aiming to increase the quality of the final product with lower production costs and energy savings.
In this scenario, the trend bodes well for the year ahead and we believe it is the way for the recovery of the European economy.
Therefore, EASchangesystems feels very positive about the decision of the organization to bring forward the next edition of Plast to 2017, instead of 2018 according to the traditional three-year cycle.

The attraction of magnetic clamping

One of the biggest attractions to our booth was the LP Pressmag, a major step-up in reducing downtime and increasing equipment productivity for bigger injection molding machines. This efficiency win can even go as far as changing a mold within minutes instead of hours. 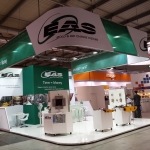 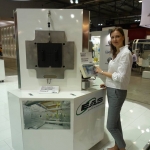 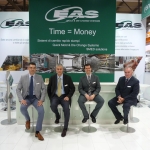 The new EAS Pressmag LP system incorporates a series of design updates that improve upon the high clamping performance and control offered with EAS’ Pressmag HP system for large injection machines. The new Pressmag LP system incorporates long pole technology that delivers a higher holding force (magnetic flux) while minimizing air gaps (which can occur between the clamping system and mold when the tool is not flat) and stray flux.